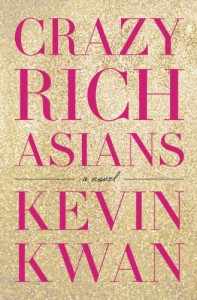 This novel is supposed to follow the lives of Nick and Rachel, a young couple, who think they know each other and themselves. However, they come from different backgrounds. Just how different? They soon find out. The novel focuses on the family of Nick and their extreme wealth and the insanity that comes with it and how they will deal with those that are different from them.

Ok. So I rated this book a 4 because overall, it was entertaining. The book is one that I call a beast because it is hefty in size. However, for the plot of the novel it probably could have been much shorter. This book took a while for me to get through because there were numerous interruptions and distractions, namely name dropping and the footnotes.I found myself having to stop many times in a chapter to try and remember all of the many, many characters and their families and having to look up stuff.

The title is a well chosen one as it sums up the characters perfectly. The characters for the most part lacked depth, even the main characters. But even still, I continued to read because I was sucked into their foolishness and wanted to find out what was going to happen and how stuff was going to hit the fan!

Now lastly, the ending or should I say the lack thereof. It ended very dryly. I guess Mr. Kwan knew he would be writing a sequel.

Needless to say, despite the constant (and intrusive) name dropping, lack of character depth, and lack of ending, it was a good and entertaining pleasure read and I am looking forward to the sequel. I also found it informative as I was not aware of such cultures.